#Throwback Thursday: True to You 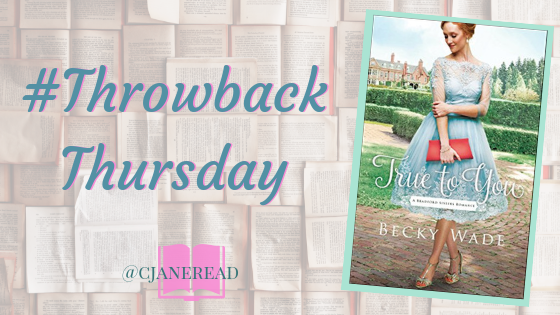 It’s Throwback Thursday! Today we are resharing our reviews of True to You. This is book one of the Bradford Sisters Series and introduced us to sisters Nora, Willow and Britt. Book 3, Sweet on You, releases in a couple of month (April 30th).

After a devastating heartbreak three years ago, genealogist and historical village owner Nora Bradford has decided that burying her nose in her work and her books is far safer than romance in the here and now.
Unlike Nora, former Navy SEAL and Medal of Honor recipient John Lawson is a modern-day man, usually 100 percent focused on the present. But when he's diagnosed with an inherited condition, he's forced to dig into the secrets of his past and his adoption as an infant, enlisting Nora to help him uncover the identity of his birth mother.
The more time they spend together, the more this pair of opposites suspects they just might be a perfect match. However, John's already dating someone and Nora's not sure she's ready to trade her crushes on fictional heroes for the risks of a real relationship. Finding the answers they're seeking will test the limits of their identity, their faith, and their devotion to one another.
Goodreads / Amazon / Christianbook
Becky Wade's Website
Review by JaneReads: (originally posted May 2/17)

So enjoyable! Some hard subjects were addressed, but there were also fun entertaining moments. Nora meets John while volunteering at a hostage training exercise. Once he finds out she is a genealogist, he hires her to help him find his birth mother so he can find out his medical history. Over the course of the search to the two become friends, but the journey has some surprises in store for them. How will they deal with what’s to come? They learn about trusting God, the importance of communication, how to forgive and finding their identity.
I found it easy to relate to Nora. First off what avid reader can’t relate to a character who says “Who had time to watch football when there were so many fantastic books in the work yet unread?” (I loved this line and couldn’t resist including it in the review.) Nora is the middle sister and feels she doesn’t compare to her sisters. She was heart-broken when her engagement was called off and feels like she has now become content with her life, however when John comes along she begins to realize that she may have be protecting herself rather than letting God take control of her life.
Some of my favourite moments were when the sisters were together. You could tell they were close, really cared about one another and tried to help Nora see things inside of her that she was unable to see in herself. The grandmother was entertaining. She can find negativity in everything, which could be very annoying for those dealing with it directly, but as a reader I was entertained at the comments she came up with.
Sneak peeks of Willow and Britt’s relationships are given and I look forward to seeing what happens for them. I can’t wait for book 2 to come and spend more time with this family.

I really enjoyed the prequel novella to this series, and so I was really looking forward to beginning this series. This book did not disappoint. I enjoyed the storyline of Nora and John trying to find John’s birth mother. Throughout the book there was lighthearted humor but also dealing with bigger issues were not shyed away from. I enjoyed seeing how Nora and John were opposites in many ways, but how together they brought out the best in each other.
The relationship between Nora and her sisters was enjoyable and I look forward to learning more about the sisters as this series unfolds.