After fulfilling a pledge to a dying friend, Zacharias Hamilton is finally free to live life on his own terms. No opportunities to disappoint those he cares about, just the quiet bachelor existence he’s always craved. Until fate snatches his freedom away once again when the baker of his favorite breakfast treat is railroaded by the city council. As hard as he tries to avoid getting involved, he can’t turn a blind eye to her predicament . . . or her adorable dimples. Abigail Kemp needs a man’s name on her bakery’s deed. A marriage of convenience seems the best solution . . . if it involves a man she can control. Not the stoic lumberman who oozes confidence without saying a word whenever he enters her shop. Control Zacharias Hamilton? She can’t even control her pulse when she’s around him. Once vows are spoken, Abigail’s troubles should be over. Yet threats to the bakery worsen, and darker dangers hound her sister. As trust grows between Zach and Abby, she finds she wants more than his rescue. She wants his heart. 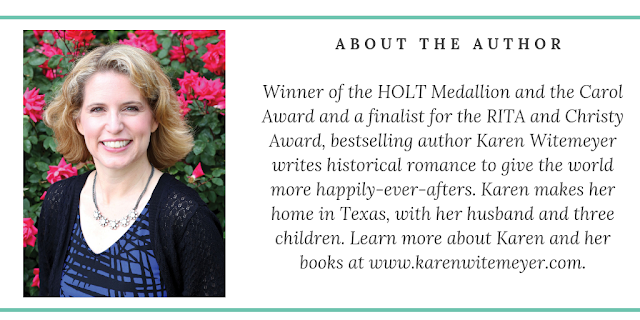 Ms. Witemeyer has done it again - given life to characters that you quickly fall in love with and don’t want to say goodbye to. After meeting Zach in ‘More Than Meets the Eye’ I was anxious to get my hands on this book and discover his story and I was not disappointed.

I found myself immersed in the story right from page one. How dare the town council tell Abigail what she can and can’t do with her bakery. She works hard and is dedicated to her sister, but she is in threat of losing everything all because she is not married. Abigail comes up with a plan that will enable her to keep her business and provide for her sister but it does require her to sacrifice some of her dreams, however she is willing to accept those consequences.

Zach is reluctant to accept Abigail’s proposal at first, but thanks to her sisters meddling he accepts. He can’t turn his back on a women in need (and his attraction to her makes it harder.) I really enjoyed how these two respected and treated one another. Zach was honorable and treated Abigail well and looked out for her sister, just like a brother would. In addition to providing for Zach’s physical needs (feeding him) Abigail supported him and helped him deal with scars from his childhood. It doesn’t take long for feelings stronger than friendship to develop but will they act on them and risk the arrangement? I was cheering for them to realize how much more fulfilling life could be if they would risk their hearts.

I cringed each time Sophia ran into Abigail, she was so mean and rude to her. It pained me to see Abigail treated this way, but she quietly accepted it and tried not to let it bother her. When she did finally stand up to Sophia she went about it with grace and kindness. I was so proud of her.

I really loved this book and hope that Ms. Witemeyer plans on writing a story for Rosalind.

One of the key decisions an author has to make before she begins to write is selecting the setting for her story. And the first choice she faces is the question of whether to use a real or imagined location. Roughly half the stories I have written are set in fictional towns. The use of a fictional setting allows an author greater freedom to manipulate the environment of her characters to fit her plot. This provides a great deal of flexibility. However, there is something special about setting a story in a real place. First, readers who are familiar with that place never fail to get excited about seeing a town they recognize in print. Second, if an author can find historical photos and documents, she can add a wonderful layer of authenticity to her setting that might otherwise be missing. Third, an author may turn up fascinating tidbits when studying the history of her setting that find their way into the story and bring a flavor the author never could have supplied on her own. This was the case as I wrote More Than Words Can Say. All of the stories in my Patchwork Family series have been set in real places. Pecan Gap, Texas for More Than Meets the Eye, Honey Grove, Texas for More Than Words Can Say, and coming this fall we’ll travel to Gainesville, Texas for the concluding novella, More Than a Pretty Face. Researching each location brought its own unique discoveries, but I have to admit that researching the small town of Honey Grove brought this history-loving girl a special level of joy. For example, there is a legend about how the town got its name that I knew needed to be incorporated into my story. Legend has it that when Davy Crockett was on his way to join the fight at the Alamo, he stopped in a grove of trees and set up camp. There were so many bees in that in letters to family and friends, he called the place a “Honey Grove.” He carved his initials into one of the trees and intended to return and settle there after the war. Unfortunately, as we know, Crockett did not survive the Alamo and therefore did not return. One of his friends, Samuel A. Erwin, later found the grove and became the first settler in 1839. Many people recall seeing the initials carved into Crockett’s bee tree even into the early 1900s, which led me to believe that this legend was based in truth. It doesn’t play a pivotal role in my story, but if you watch for it, you’ll find it mentioned. Discovering the Honey Grove Preservation League’s website proved a tremendous boon. Their online historical resources are some of the best I have ever come across. Historical photos, newspaper articles, government records—it was like stepping through a time portal every time I visited. And I visited often. Thanks to the Preservation League, I was able to mention real people and places in my novel. Places like the Commercial Hotel, the home of James Gilmer that was built during my time period, Wilkins, Wood & Patteson Dry Goods, and Dora Galbraith Patteson’s millinery shop on the east side of the town square. While Zacharias Hamilton and Reuben Sinclair are completely fictitious characters, there really was a lumberyard located on the corner of Sixth Street and Rail Road. As fiction authors are wont to do, I did take a few liberties with Honey Grove’s history. To my knowledge, there was never any city ordinance banning women from owning businesses in town, which was a key plot point in More Than Words Can Say. In addition, Mayor Chester Longfellow was a complete invention of my imagination. The true mayor of Honey Grove during this time period was J.H. Smith, a man who served in that capacity from 1888-1897. He must have been a well-loved city official to hold office for nearly a decade. I paid brief homage to him by having him step back into office when my fictitious mayor resigned. I hope you enjoy stepping back in time with me into historic Honey Grove, Texas. Zach and Abigail might not have lived there in truth, but I like to believe their tale is a representation of the many amazing love stories have taken place in that sweet little town through the years. 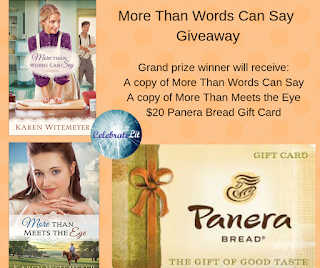 To celebrate her tour, Karen is giving away a grand prize that includes More Than Words Can Say, More Than Meets the Eye, and a $20 Panera Bread gift card!!

Be sure to comment on the blog stops for nine extra entries into the giveaway! Click the link below to enter.
https://promosimple.com/ps/e4f4/more-than-words-can-say-celebration-tour-giveaway
Posted by JaneReads at 8:00 AM 2 comments: