The Esther Paradigm by Sarah Monzon

Hannah Pratt dreams of starting a school for the Bedouin clan she grew up with as a missionary kid, and finally her hopes are coming true. But shortly after she returns to the desert from her college years in the U.S., she discovers her parents have received threats from their Muslim neighbors. As the danger escalates, Hannah finds she’s in the middle of a battle no one seems to understand. She must decide to what lengths she'll go to stay faithful to the mission to which God has called her. Even if it costs her everything.

As sheikh, Karim Al-Amir feels the weight of responsibility as the leader of his people. When a mysterious illness ravishes the clan’s flocks and threatens to destroy their centuries-old way of life, locals believe the American doctors and their daughter, his childhood friend, Hannah, are to blame. Karim must do something to keep them safe—even if the only solution can be found within marriage vows.

In a society where the line is drawn between us and them, Christianity is outlawed, and foreigners are mistrusted, will their union heal wounds or inflict the final fatal blow?
Goodreads / Amazon
Sarah Monzon's Website

“God was in control of all. I had but to be faithful to what He put before me.”

Wow this book was so good! I did not want to put it down. What begins as a marriage to put an end to the pressure to marry and to provide protection grows into so much more. I absolutely adored Karim and Hannah. They come from two different cultures, but are committed to the same people and willing to share their lives and work together to overcome the obstacles they face. There is romance, danger and cultural challenges throughout. Karim’s love for Hannah is obvious right from the beginning and he is willing to accept any backlash (if they dare) from his tribe for his choice of a bride. Hannah believes that Karim only marries her to protect her and her parents. She fights feelings of insecurity throughout, but she is so much stronger than she realizes. She is determined to respect the culture around her and Karim’s beliefs but does not shy away from sharing her beliefs when asked. Both are tested and have to decide what is most important to them. I loved following them as their friendship grew into a marriage commitment and then the ultimate realization of a deep love.

Each character felt genuine. Karim’s mom was great with Hannah, I was so proud of the way she treated her. There were many wonderful moments that made me just love this book. The romantic moments were great and had me swooning at times, but also the friendship shared with others and the sharing of God’s love was inspiring. Mixed throughout there were many scenes or sayings that had me laughing out loud. I won’t forget the line “I’m not singing the song that never ends to the camels.” I cracked up so hard when I read this one.

I loved that Ms. Monzon took a Bible story and used it as inspiration to create this story. With this book being set in another country focusing on the muslin faith, it is obvious that a lot of research would have had to be done in order to make sure the characters felt real and kept in character. Ms. Monzon did an absolutely wonderful job of keeping it real. I highly recommend this book and will definitely be savouring this story again.

Other Books by Sarah Monzon: 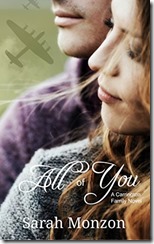 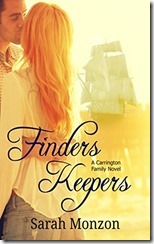 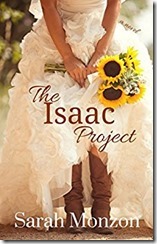 All of You Review / Finders Keepers Review
Goodreads / Amazon
Posted by JaneReads at 8:00 AM