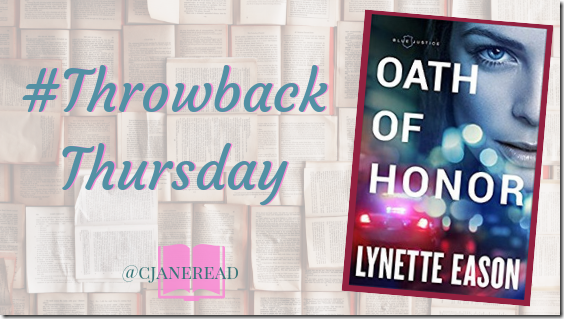 It’s Throwback Thursday! Today we are resharing our reviews of Oath of Honor. This is book one of the Blue Justice Series and introduced us to the St. John family. Book 3, Code of Valor, just released on Tuesday (Jan. 1).

Police officer Isabelle St. John loves her crazy, loud, law-enforcement family. With three brothers and two sisters, she's never without someone to hang out with--or fight with. And she knows they'll be there for her when things get tough. Like when her partner is murdered and she barely escapes with her own life.

Determined to discover exactly what happened, Izzy's investigation sends her headfirst into a criminal organization, possibly with cops on the payroll--including someone from her own family. With her dead partner's handsome homicide detective brother Ryan shadowing her every move, Izzy's head is spinning. How can she secure justice for her partner when doing so could mean sending someone she loves to prison? And how will she guard her heart when the man she's had a secret crush on for years won't leave her side?
Goodreads / Amazon / Christianbook
Lynette Eason's Website
Review by JaneReads: (originally posted Jan. 3/18)

In typical Eason fashion this story draws you right in and does not let go until you get to the end. It was filled with heart pounding suspense, great family interactions, sad moments and justice sought. I do have to say that even though I knew Izzy’s partner was going to die (it says so on the back cover), I had to take a moment to mourn his death when it happened. After meeting him in just a few paragraphs I was drawn to him and loved his interactions with Izzy.


After the initial murder, Izzy teams up with her partner’s brother, Ryan, to catch the killer. Along the way someone is after Izzy and she has quite a few intensely scary incidents that had my heart beating in fear. Each time she survived I breathed a sigh of relief. Their investigation seems to lead to more questions than answers and at times it seemed like there were multiple cases going on but in the end they all interweaved providing answers. I was taken by surprise at some of the connections. I was a bit overwhelmed at the number of characters introduced, it was difficult at first to keep everyone straight and figure out how they connected.


Izzy was dealing with so much, she just lost her long-time friend and partner, she has to decide what to do about her brother’s strange actions, a hit man is after her, a bad someone from her past has returned and now she is starting to see her partner’s brother differently. Ryan is also dealing with a ton, he just lost his brother and while investigating his murder connections to his other deceased brother’s death are revealed. He has been experiencing new feelings for Izzy for a while but never acted on them, now they are spending much more time together and when Izzy’s life is threatened he realizes just how much she means to him. Both were very strong characters able to put their personal emotions aside to do their job and seek justice for Kevin’s murder. I really enjoyed the interactions between Ryan and Izzy, the progression of their relationship from friends to more than friends felt natural.


Overall the story kept me on my toes trying to figure out who the guilty people were and what was going on with Izzy’s brother. I am intrigued to learn more about Izzy’s law enforcement family members and hopefully get to catch up with Izzy and Ryan in future books.

Once I started this book, I had to finish it as fast as possible as the action was non-stop. I enjoyed this first book in the Blue Justice series and was immediately drawn into the St. John family. I enjoyed the intensity of this story held throughout the book and loved the ending. While there was a nice romance story here also, it was not the focus of the story.


I highly recommend this book if you are looking for an intense suspenseful novel with a sweet romance along with it. I look forward to getting to know the rest of the family in future books in of this series.