Jane Reviews: In Too Deep by Lynn H. Blackburn

About the Book:
When the dive team is called in to recover a body from a submerged car, they aren't prepared to find an encrypted laptop--or an unsettling connection between investigator Adam Campbell and the dead accountant.

Adam turns to his friend Dr. Sabrina Fleming--a professor at the local university with unparalleled computer security and forensics skills--to recover the files from the laptop. But the deeper they dig, the deadlier the investigation becomes. When evidence uncovers a human trafficking ring and implicates members of Adam's own family, he and Sabrina will have to risk everything to solve the case.

The truth could set hundreds free--but someone is willing to do whatever it takes to silence anyone who threatens to reveal their secrets. Award-winning author Lynn H. Blackburn invites readers back to Carrington, North Carolina, where everything is not as it seems and sinister elements lurk behind the idyllic façade.
Goodreads / Amazon / Christianbook
Lynn H. Blackburn's Website

This book opens with the dive team being called to recover a body and car that has gone into the lake. It appears to be a suicide until they discover words written on the victim’s body, this message opens up so many questions. What do these words mean?

Adam and Sabrina have been friends with each other for quite a while and have romantic feelings for the other, but both are hesitant to share their feelings because they fear the other does not reciprocate the feelings. While they have worked together in the past on cases, this case has them spending more and more time with one another. How long can they keep their feelings at bay? Or will they finally open up? I really liked these two in the first book and continued to like them in this one. I enjoyed following the progression of this relationship. I also enjoyed spending time with the supporting characters around Adam and Sabrina. What a wonderful group of co-workers and friends to have.

This story is fast-paced and suspenseful. As the team digs deeper into the investigation the threat gets more deadly. Someone is determined to keep them from discovering their secret. Sabrina ends up in the hospital twice in less than 12 hours and Adam is also injured. Who is after them and why? I did not want to put this book down until I had the answers.

The ending left me satisfied and sad at the same time. While I suspected who the main villain was I did not see the final twist coming and was sad for what it meant for Sabrina. However not all was depressing for her as she had the support of her friends and the love of Adam to lean on. This could be read as a stand-alone, but I highly recommend reading book one first to get to know the team members better and some of their back story (and Beneath the Surface was just as suspenseful as this one). I will be keeping an eye out for the next book in this series and there are two team members that I would love to get to know better (and hoping they get together).

(I received a complimentary copy of this book from Revell through NetGalley.
Opinions expressed in this review are completely my own.) 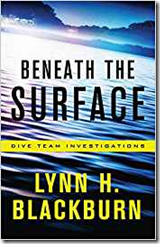 Beneath the Surface Review
Goodreads / Amazon / Christianbook
Posted by JaneReads at 8:00 AM