Jane Reviews: A Vast and Gracious Tide by Lisa Carter (plus Giveaway)

Welcome to the blog tour and giveaway for A Vast and Gracious Tide by Lisa Carter, hosted by JustRead Publicity Tours!

﻿
﻿ About the Book:﻿﻿
A wounded veteran and the police chief's daughter must work together to bring a killer to justice.

Caden Wallis lost friends, his girlfriend, and even his leg to the ravages of war. He arrives on the Outer Banks broken and still reeling, struggling to make peace with his new life.

McKenna Dockery has been stuck in limbo since her fiancé died three years ago. Now, when the handsome yet heartbroken Caden arrives at her doorstep, she starts to wonder if there may be hope for her heart after all . . .

But no sooner do they meet than a man is found murdered on McKenna's property - and Caden is the prime suspect. The two must learn to trust each other, or no one will be safe in the tangled web of conspiracy, greed, and deceit lurking in the tidal marshlands of the Outer Banks.
Goodreads / Amazon / Christianbook 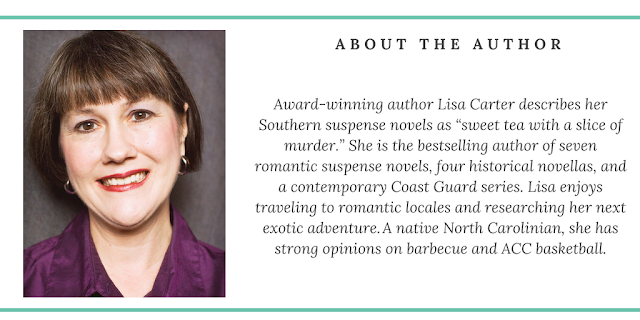 
This story shows the difficulty that an injured war vet faces when returning to civilian life. Caden comes to Tuckahoe with one mission in mind but meeting McKenna takes him on a journey he hadn’t planned for. McKenna is determined to help Caden even though he doesn’t want it. I really enjoyed following the relationship development between the two of them. McKenna is still getting over her fiancé that passed away 3 years ago, and struggles with the possibility of ever loving someone else. She has put her dreams on hold to protect her heart. She finds herself beginning to feel things for Caden that make her want to risk her heart but she fights this constantly. Each time Caden and McKenna began to take a step forward in a relationship between them some issue would surface and they were back to the beginning again. This began to feel a bit repetitive making it feel like they would never move forward.

On the suspense side, there were times that I found the historical facts to be a bit confusing to follow and found myself getting a bit lost with what was happening. I felt it was pretty obvious who the bad guy was fairly early into the story, and when his motive was revealed it felt a bit unbelievable.

I did enjoy that the story highlighted that true healing only comes from having a relationship with God. He will help us overcome anything. Caden realizes his need for God and begins to accept God’s plan for his life. McKenna learns to open her heart again and follow her dreams. I enjoyed the family feel of the diner and looked forward to the interactions between McKenna and Lovey.

(I received a complimentary copy of this book from Gilead Publishing through NetGalley.
Opinions expressed in this review are my honest opinion and completely my own.)

Don't miss your chance to enter this great giveaway prize pack! One winner (US only) will receive:
Print copy of A Vast and Gracious Tide by Lisa Carter

Enter via the Rafflecopter giveaway below.

Follow along with the tour HERE for more chances to win!
Posted by JaneReads at 8:00 AM