Jane Reviews: The House at Saltwater Point by Colleen Coble

The dangerous beauty of Lavender Tides is harboring secrets that reach around the world.

Ellie Blackmore is making a name for herself as a house flipper. But when her sister Mackenzie disappears, Ellie can’t focus on anything but uncovering what happened. Her only clue is the bloodstain on the deck of Mackenzie’s boat. Ellie knows her sister isn’t on the best of terms with her ex-husband, Jason, but he wouldn’t kill her—would he?


Coast Guard intelligence officer Grayson Bradshaw believes Mackenzie faked her own death after stealing a seized cocaine shipment. The problem is convincing Ellie, who seems to view him as the true enemy.

Both Ellie and Grayson want truth, but truth—and family—is often more complex than it first appears. From international terrorism to the peaceful lavender fields of Puget Sound, The House at Saltwater Point is a thrilling race to uncover the truth before it’s too late.
Goodreads / Amazon / Christianbook
Colleen Coble's Website

I was hooked from the moment Mac disappeared; I had to know what happened to her. With the amount of blood at the scene the question isn’t just where is she but is she still alive?

I found myself quickly connecting with Ellie and feeling for her. The situation with her sister missing was bad enough but then you add in the accusation that Mac is guilty of a crime and that someone appears to be after her things get pretty overwhelming for Ellie. Grayson, a Coast Guard investigator who is looking for Mac, agrees to allow Ellie to help him find Mac. They have differing opinions about Mac but learn to work together through it.

So many twists and turns happened that I was kept guessing who was behind what was going on and what the motive was. There were a lot of characters introduced that at times it was hard to keep everyone straight or how they even connected. When a character who I thought was minor showed up later on I had to remind myself of who they were.

As much as I wanted to know what happened to Mac it was the character relationships that I loved the most about the story. I enjoyed following Grayson as he learned about his past and began to accept his new reality. Ellie was fiercely loyal to Mac and wouldn’t listen to anyone who tried to tell her something different than what she believed about her. I enjoyed watching the development of the relationship between Grayson and Ellie and liked the way it was left. The unanswered question of Shauna and Grayson’s sister leads readers to believe there will be a third book to this series. I will be keeping an eye out for it.

(I received an complimentary copy of this book from Thomas Nelson through NetGalley.
Opinions expressed in this review are my honest opinion and completely my own.)

Other Books in this Series: 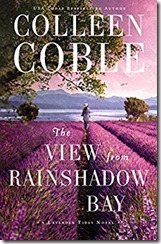 The View from Rainshadow Bay Review
Goodreads / Amazon / Christianbook
Posted by JaneReads at 8:00 AM