Jane Reviews: Lake of the Cross by LD Stauth

Tumbling waterfalls, white pelicans, and sweet serenity were just a few of the reasons Karly Foster became a park naturalist. But when rumours of an unsolved murder surface and a friend mysteriously disappears, Karly’s world becomes anything but peaceful. Then, as if she needed her tranquility shattered further, her ex-boyfriend, Blake, literally flies back into her life.

Blake Fenton, the owner of Wilderness Bush Adventures, can’t believe it. Was that really Karly Foster he’d just flown to the Aspen Ridge Emergency, suffering from heat stroke? After three years, she has gotten even more beautiful … if that were possible. It quickly becomes apparent, however, that flying sparks between him and his feisty former flame could leave nasty burns. Again.

Then Blake makes a horrifying discovery, and strange and terrifying events begin to unfold. As Blake wrestles with fear for Karly’s safety and confusion over his feelings for her, his wilderness-guide friend, Henry, implores him to seek God for answers. For centuries, God has been revealing Himself to the locals in Henry’s remote community—in a very unusual way.

When Blake and Karly join forces to compete in the No Trace Canoe Race, they find themselves fighting, not just to win, but to stay alive. Because someone has committed murder in the campground, and the killer’s sights have turned on them.

Do Blake and Karly have a future together? Or will this moment, when they have finally found each other again, be the last one they ever share?
Goodreads / Amazon / Christianbook
LD Stauth's Facebook Page


I couldn’t wait to get my hands on this book. After finishing Ms. Stauth’s debut novel and book 1 of this series last year (Stormy Lake) I immediately added book 2 to my wish list. The banter between Karly and Blake hooked me in the first book and I was really hoping that we would get to spend more time with them in the next book and my wish came true. In this book they are the main players and we get to get inside their minds and find out what makes them who they are.

The prologue sucks you right in, easily connecting you with Karly & Blake and kept me reading to find out if my hopes for them were going to come true. Every time things look promising something gets in the way either physically or emotionally. I did not want to put the book down.

All the characters felt real and each one was unique, no two felt the same. I especially enjoyed Henry, his teasing of Blake and his sense of humor were entertaining. But he also had some really deep moments that add to the story. I have mixed feelings toward Harrison, there were times I liked him but there were times he annoyed me. And don’t get me started on Raven, each time I began to feel for her she goes and does something that takes all that feeling away. Her attitude annoyed me.

As much as I loved the characters I loved that the whole story kept me guessing, who is behind all the strange events and what is their motive? I had not suspected the person who turned out to be the villain as the guilty party, but once it was revealed and I got thinking about it I began to piece together the little hints that had been provided and it all became obvious to me. I enjoyed that I wasn’t able to figure it out ahead of time.

This story was very well written. Descriptions that make you feel like you are in the midst of everything, characters you want to cheer for, intrigue and suspense that keeps you guessing, and the sharing of God’s love in a natural way. I look forward to reading more by Ms. Stauth in the future.

Other Books in this Series: 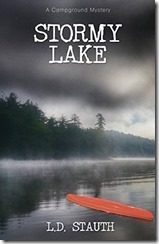 Stormy Lake Review
Goodreads / Amazon
Posted by JaneReads at 8:00 AM