About the Book:
Artist Livy Johnson needs a fresh start. That's what a broken heart and forgotten dreams can do to a person. On little more than a whim, she reclaims her grandmother’s old home in quaint Laurel Cove, North Carolina and vows to restore its original charm. When she literally collides with childhood friend, Jack Bowdon, Livy wonders if she’s back for an entirely different reason.

Jack can’t believe his childhood crush is back. As the owner of Bowdon's Supplies, and once again the town's most eligible bachelor, he offers to help Livy with repairs. Together they embark on the project—and an undeniable whirlwind romance.

But it’s not all smooth sailing. Can they survive the destructive pain of their pasts to discover God’s grace waiting to renovate their hearts?
Goodreads / Amazon

I fell in love with Jack and Livy and the community around them very quickly. From the first moment Livy arrives at the Inn, Aunt Bea was there welcoming her to town. Jack & Livy’s pasts have left them broken and with no interest in getting involved with anyone, however the moment they meet at the inn they feel a connection to one another. Jack quickly figures out why the connection is there but it takes Livy a bit longer to figure out why she feels so comfortable with Jack already. Turns out they played together one summer when she was visiting her grandmother years ago. Jack is elated that Livy has returned and he has a chance to explore feelings he had for her when he was much younger. However neither are as young and naïve as they once were, both carrying scars from pasts. Livy’s scars are very recent and her trip to town is her first step in dealing with these scars and to find herself. Jack thought his past was behind him, but when his ex-wife finds out about his relationship with Livy, his past begins to resurface trying to cause issues.

I absolutely loved that Jack’s friends welcomed Livy to their group just because she was a friend of Jack’s, but they were not just friendly to her they fully accepted her as part of their group. Through the girls Livy found friendships she had never imagined having with others. Their welcoming made me feel like a part of their group.

Jack was smitten with Livy as a child and now that they have been reunited he finds himself smitten with the grown-up version of her. However Jack does not push her into a relationship she is not ready for, he shows her kindness and patience but wasn’t shy about expressing his feelings. The budding relationship was enjoyable and had me cheering that they would make it. The flirting was amusing.

There are a few themes to the story - the healing of Livy, learning to forgive, and new beginnings all found by trusting God. I was so engrossed with this story that I was torn between enjoying the story so much I didn’t want to put it down and not wanting to get to the end too quickly that I would have to say goodbye to Laurel Cove. I will be keeping an eye out for future books by Ms. Tysinger.

(I received a copy of this book from CelebrateLit; opinions expressed in this review
are my honest opinion and completely my own.)


Someplace Familiar began way back in 2014 when I participated in National Novel Writer’s Month, a challenge to write a 50,000 word novel during the month of November. It was an exhilarating, albeit exhausting, experience! Since then, the book was workshopped with a critique group, had large portions rewritten countless times, pitched at workshops, edited by two editors, and even renamed (original title was Good Graces). After a lot of prayer, I decided that self-publishing would give me the greatest flexibility and control while being able to maintain my responsibilities as a wife, mother, and full-time communications director. It’s been a wonderful ride!

About the Inspiration for Someplace Familiar One thing I’ve learned about myself through writing Someplace Familiar is how much I am personally drawn to setting and place. The idea for the book was born out of my desire to introduce readers to the charming small-town life found in the Blue Ridge Mountains of North Carolina where I went to college. Laurel Cove, the fictional town where the story is set, is directly based on my best friend’s hometown of Burnsville, NC. The other source of inspiration comes from my great-grandmother’s tiny bungalow home in West Palm Beach, Florida. Long weekends and summer vacations spent there were full of imagination, adventure, and sweet memories. The scents of her garden, feel of the damp earth beneath my feet, slow pace matching gauzy curtains dancing in the breeze—it all is mirrored in the cottage home of Livy’s Gram in the book. The rest of the story formed around my desire to capture my childhood memories of this home that was so magical and safe for me.

About My Writing Style Here are a few ways I would describe my writing style: Sensory—I aim to provide readers with an experience that enlivens all of their senses. Relatable—It’s my hope that readers see themselves in realistic, flawed characters trying to make their way to discovering grace in a less than perfect world. Charming—Like any good southern fiction, there’s a good dose of charm in these pages.

My prayer is that Someplace Familiar will touch readers with an awareness of God’s grace even during circumstances and within relationships that feel hopeless. Restoration is possible! 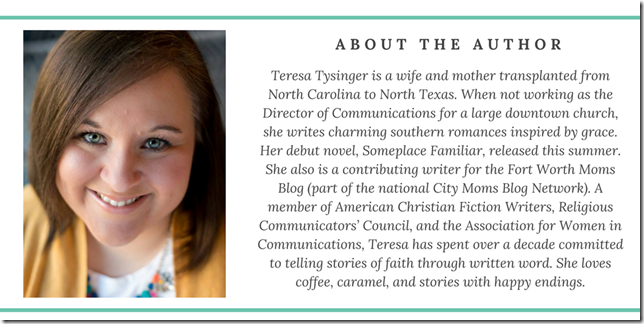 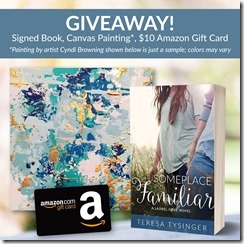 To celebrate her tour, Teresa is giving away a grand prize of a gift basket that includes a signed copy of the book, an Original Painting by Author’s Sister (artist Cyndi Browning), and a $10 Amazon Gift Card!!
Click below to enter. Be sure to comment on this post before you enter to claim 9 extra entries! https://promosimple.com/ps/ca5b
Posted by JaneReads at 8:00 AM