Join the Flub by Christy Barritt

There’s no business like show business . . . especially when a killer is involved. Joey Darling’s local movie premiere was supposed to be a win-win for everyone involved. All the proceeds would go to the children’s wing at a local hospital, and the online buzz would create positive press for the area’s tourism. But things go awry when the event is sabotaged and Joey’s stunt double is seriously injured.
Suspects seem sparser than quality G-rated movies, and police fear the intended target was actually Joey. Detective Jackson Sullivan and neighbor Zane Oakley—two men competing for Joey’s affection—insist on trading off guard duty until the bad guy is behind bars. To make matters even worse, Joey’s ex shows up right before the release of his tell-all book about his life with the Hollywood sweetheart.
Someone seems determined to create real-life drama. But Joey isn’t one to be deterred. Though a movie-worthy villain wants to pull the plug on this production—and maybe even on a few people’s lives—Joey is determined that the show must go on.
Goodreads / Amazon

Ms. Barritt had me laughing, cringing and trying to decipher who the culprit right along with Joey. An accident happens at the movie premiere and her stunt double gets injured but was Joey the intended target? It appears that way after other incidents begin happening. Can Joey figure out who is behind everything? Of course she can with the help of Jackson, but will it be too late? Along the mystery that’s happening Joey is dealing with figuring out her feelings towards to the two guys in her life. There is one that I have been cheering for since the beginning of this series and was pleased with things that happened throughout this book.


“There’s something refreshing about realizing your
love story doesn’t have to be great.” 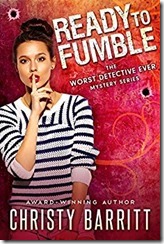 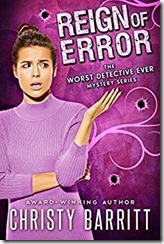 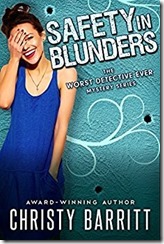