If I Run by Terri Blackstock

Casey Cox’s DNA is all over the crime scene. There’s no use talking to police; they’ve failed her abysmally before. She has to flee before she’s arrested . . . or worse. The truth doesn’t matter anymore.
But what is the truth? That’s the question haunting Dylan Roberts, the war-weary veteran hired to find Casey. PTSD has marked him damaged goods, but bringing Casey back can redeem him. Though the crime scene seems to tell the whole story, details of the murder aren’t adding up.
Casey Cox doesn’t fit the profile of a killer. But are Dylan’s skewed perceptions keeping him from being objective? If she isn’t guilty, why did she run?
Unraveling her past and the evidence that condemns her will take more time than he has, but as Dylan’s damaged soul intersects with hers, he is faced with two choices: the girl who occupies his every thought is a psychopathic killer . . . or a selfless hero. And the truth could be the most deadly weapon yet.


Loved this book! Set in the present tense and told in first person by two characters, Casey and Dylan. This took a little getting used to at first, but I loved it. I felt I was right there with both of them and the way the chapters were divided between the people made it easy to switch between the two. Casey discovers her best friend murdered and because of events from her past she doesn't trust cops, knowing she will be framed for the murder she goes on the run. Dylan has been hired by the family of the victim as a private investigator to try to find Casey as the cops have limited resources. Casey is smart and seems to be able to keep one step ahead of Dylan. Even though Casey is running for her life she can’t stop herself from helping others and gets involved in a mystery of a missing teen. This may lead to her downfall, but she is willing to take the risk to help someone else. I loved her personality. Dylan is lead to believe that Casey is the murderer but as his search deepens he begins to question what he has been told. Will he catch up with Casey and will he be able to turn her in? I couldn't put this one down. My takeaway quote is: "See Beyond the dark part and find the good stuff." When we look we can find something good in the mist of the dark. One of the two mysteries gets solved in this book, but the other leaves you hanging. Book number two, If I’m Found, comes out in a month (March 21) J 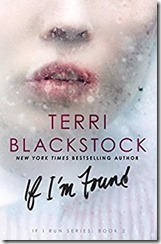