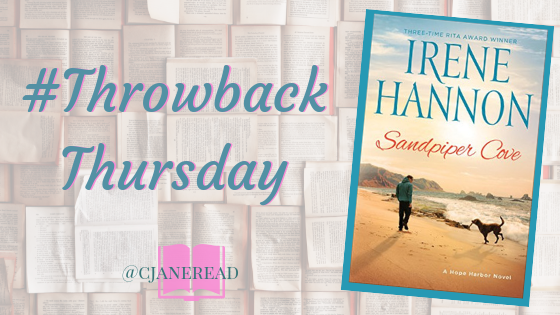 It’s Throwback Thursday! As we patiently await the next book in the Hope Harbor series by Irene Hannon, it seems fitting to reshare our review of Sandpiper Cove, which is book 3 and has been our favourite of the series so far. Book 5, entitled Driftwood Bay, releases April 2nd.

Hope Harbor police chief Lexie Graham has plenty on her plate raising her son alone and dealing with a sudden rash of petty theft and vandalism in her coastal Oregon hometown. As a result, she has zero time for extracurricular activities--including romance. Ex-con Adam Stone isn't looking for love either--but how ironic is it that the first woman to catch his eye is a police chief? Yet wishing for things that can never be is foolish.

Nevertheless, when Lexie enlists Adam's help to keep a young man from falling into a life of crime, sparks begin to fly. And as they work together, it soon becomes apparent that God may have a different--and better--future planned for them than either could imagine.

Best of the series so far. I found myself cheering for Adam and Lexie very quickly. I enjoyed getting to know them individually and then once they interacted I knew I wanted them together. But can that work when one is the police chief and one is an ex-con?


Adam has made mistakes in his past, but since coming to Hope Harbor he has been a model citizen, working hard and helping others. However because of his past he is dealing with self-esteem issues and wonders who would want to even be friends with him never mind who would date him. But thanks to the influence of Reverend Baker he has learned to turn to God. His confidence is just starting to build up when a rumor starts spreading about him while he debates how to handle it he gets a true surprise. Lexie on the other hand has turned away from God due to a tragic experience in her past and has not shared the full story with anyone. However she feels compelled to share her whole story with Adam. Can he help her see that God is always with her and there for her?

In addition to previous characters we have come to know over the series was the addition of Lexie’s mom and son, Annette & Matt. I loved the mom, she was just the right amount of pushy with Lexie. Unlike previous books where Charley seemed to know more than was possible, this time things seemed much more realistic. The secondary storyline with Brian was enjoyable as well, I liked that it didn’t seem like I was reading a separate story wondering how they would connect.

Themes of second-chances, change being possible, forgiveness being offered and good being brought out in people are evident. The budding romance was written delightful and enjoyable, with a wonderful and heart-warming ending.

This series quickly became one of my favorites.  Through the series, Hope Harbor has become quite the community.  I have such a vivid picture in my mind of the community and people – I enjoy visiting Hope Harbor through each new additional book in this series.  Sandpiper Cove did not disappoint.  It’s a heartwarming story, that shows how God works through the character’s lives.  The storyline played out so nicely between the main characters, Lexi, the police chief and Adam, the ex-con.  The initial tension between them based on their previous lives and seeing how this storyline progressed was great.  Initially I had a difficult time wrapping my head around the character of Charlie.  It seemed a little too unrealistic to me at first.  However, by the end of the first book in this series, I started seeing Charlie’s character in not quite so much of a literal way, but rather more of a symbolic, metaphorical way.  And then I started to really enjoy Charlie’s character and enjoyed their interactions at the taco stand.    I had an expectation that  by the end of the book, everything would be dealt with and nicely tied up.  I was surprised by the ending of the storyline with Brian  - at first I felt like it wrapped up a little too quick, with loose ends.  But then I realized I was happy with the ending of this storyline as it felt very realistic and true to life.