After losing her parents in a car accident and her sister to a house fire, Christy Reed has been mired in grief. Life is finally starting to feel normal again when an envelope arrives in the mail--addressed in her sister's handwriting. And the note inside claims she is still alive.
FBI Special Agent Lance McGregor, a former Delta Force operator, is assigned to reopen the case, but he's coming up with more questions than answers. If Ginny Reed is still alive--who is the woman buried in her grave? Where is Ginny? And is Christy a pawn in a twisted cat-and-mouse game--or the target of a sinister plot? As he digs deeper, one thing becomes clear: whoever is behind the bizarre ruse has a deadly agenda.
Goodreads / Amazon / Christianbook
My Rating & Thoughts:    🌟 🌟 🌟 🌟  (4 stars)
“There were two types of fear – the kind that immobilized and victimized and the kind that empowered and spurred into action.”


Christy has been through quite a bit of trauma over the past few months and just when life is beginning to return to normal a villain starts playing with her. In desperation she turns to the FBI and is hooked up with Special Agent Lance McGregor. Because the villain has told her not to involve the cops they create a ruse to keep the real reason for their relationship a secret, but what was a facade at first leads to feelings evolving. I enjoyed following this relationship building. Christy has been amazingly strong during her trauma and she is able to show Lance that God has always been there for him through his painful experiences and is able to help lead him back to trusting God.

This book did take me a little while to get into as I just didn’t connect with caring about the case as fast as I did in the previous book. However about half way through I was into the story, caring about the characters and really felt for what Christy was going through. The villain needed to be brought to justice! I was bothered by the fact that most of the way through I knew who the villain was but I didn’t understand their motive. Even when it was revealed I struggled with believing that was what had motivated them. But I was connected with the characters so much by this time that I accepted it and needed to know that everything was going to turn out alright.

In addition to this case Lance is dealing with other cases and a personal situation that have him being pulled in so many directions, I felt for him and don’t know how he was even functioning at certain parts. I enjoyed the scenes that included Special Agent Mark assisting Lance and I really enjoyed catching up with Mac and Lisa from book one. Ms. Hannon weaved in a story with McGregor brother Finn that has left me wanting to know what happens with him that I must read book 3 now.


“Even if it seems God is ignoring us, he’s listening. And when the time is right – his time, not ours – he offers us the guidance we need.”

My Rating & Thoughts:    🌟 🌟 🌟 🌟  (4 stars)
﻿
I enjoyed Thin Ice.  It was a storyline that held my attention and was suspenseful through to the end of the book.  While the true identity of the villain was not fully revealed earlier on, it did become obvious who the villain was.  The villain was very sinister... almost too creepy.  I really enjoyed the skating aspect of Christy’s character, and enjoyed the progress and she and Lance get to know each other.  Something that I always enjoy about Irene Hannon’s books is the look into the character’s personal lives and issues as they are developing a relationship.  This book did not disappoint there.  I enjoyed the look into Lance’s past and seeing him deal with things in his personal life as the romantic relationship is progressing.   Now I am looking forward to the next book in the series.
(I purchased my copy of this book; opinions expressed in this review
are my honest opinion and completely my own.) 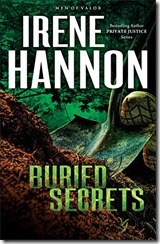 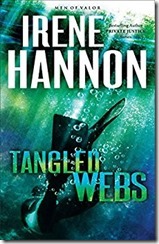