Between Heaven & The Real World: My Story by Steven Curtis Chapman 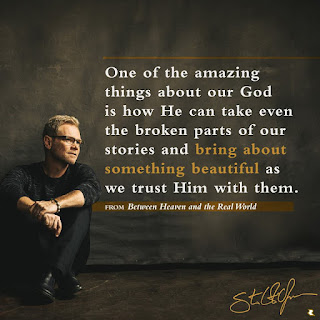 For decades, Steven Curtis Chapman's music and message have brought hope and inspiration to millions around the world. Now, for the first time, Steven openly shares the experiences that have shaped him, his faith, and his music in a life that has included incredible highs and faith-shaking lows.
Readers will be captivated by this exclusive look into Steven's childhood and challenging family dynamic growing up, how that led to music and early days on the road, his wild ride to the top of the charts, his relationship with wife Mary Beth, and the growth of their family through births and adoptions. In addition to inside stories from his days of youth to his notable career, including the background to some of his best-loved songs, readers will walk with Steven down the devastating road of loss after the tragic death of five-year-old daughter Maria. And they'll experience his return to the stage after doubting he could ever sing again.
Poignant, gut-wrenchingly honest, yet always hopeful, Steven offers no sugary solutions to life's toughest questions. Yet out of the brokenness, he continues to trust God to one day fix what is unfixable in this life. This backstage look at the down-to-earth superstar they've come to love will touch fans' lives and fill their hearts with hope. Includes black-and-white photos throughout.
My Rating & Thoughts:    🌟 🌟 🌟 🌟  (4 stars)


“God is for us and with us every step of the journey,

even when we can’t see Him or feel Him.”

I was really looking forward to reading this book. I have been a SCC fan for years, grew up listening to his music in high school, but it is only in the last 10 or so years that I have had to opportunity to attend a few of his concerts and listen to him share stories from the stage. I read his wife’s book, Choosing to See, when it first came out and knew her side of their story and the heart-wrenching experience they have gone through losing their daughter. I found it interesting to hear Steven’s perspective, his experiences growing up, how his music career began and the starting of his own family. I felt like Steven was completely open and honest about how he feels unworthy of what he has accomplished. It did surprise me to hear how much he and his wife struggle in their marriage, however I do understand that him being on the road so much would be difficult. There were times he had me laughing and times he had me crying. Two things did bother me while reading. One being there were so many names mentioned of people I couldn’t place that I struggled to follow what role they played in his life. My guess was that they were record execs, producers, etc. The second being there were times where he would be telling one story then move on to another before finishing the first and then finally go back to first. This felt choppy and the jumping annoyed me as I was invested in the first story and felt like I wasn’t getting all of it before he moved on the next. Overall, I really enjoyed getting to know his story and especially liked hearing the inspiration behind various songs. I feel like readers get to know the real Steven rather than just the one we see on stage.

“Because of the grace of God and the fact that Jesus has already taken all the failure on Himself, it’s actually impossible for you to be a failure in His eyes.”