As teenagers, Kristin Dane and her two best friends took a vow to make the world a better place. Twenty years later, she's fulfilling that pledge through her fair trade shop that features products from around the world. All is well until, one by one, people connected to the shop begin dying.


Detective Luke Carter, new to the St. Louis PD, wants to know why. Before he can answer that question, however, the FBI weighs in and Kristin suddenly finds herself in the middle of international intrigue--and in the sights of the ruthless mastermind behind an ingenious and deadly, scheme. Can this cold-blooded killer be stopped before more people die . . . including Kristin?

This is the second book in Ms. Hannon’s Code of Honor series and features Kristin from the Treehouse Gang. It starts with the wedding of Colin (from book 1) where Kristin first meets Detective Luke Carter. A couple days later Kristin discovers her shop assistant dead, and Luke becomes the lead detective on the case. The police have no leads until another murder appears to have ties to the same shop. As the police begin to piece clues together it becomes apparent there is so much more at play that ever suspected and Kristin’s shop is in the middle of it all. They need Kristin’s help to find the evidence needed to get to the bottom of what has been happening. Once the FBI becomes involved in the investigation Luke and Kristin find themselves in the middle of it all. Attraction blooms between the two of them and while they agree to keep it professional while Luke is working the case their feelings are put to the test when danger ensues. They story keep me engaged wanting to know if the guilty party would be caught and if Luke and Kristin would be able to move forward in a relationship.

The character relationships stood out to me. I loved the strong friendship between Colin, Rick and Kristin. The guys were like big brothers to Kristin, looking out for her and making sure Luke knew they were watching him. But they also knew when to stand back and allow Kristin to choose who to let into her life. The brother-sister bond that Luke and his sister had was great, while her determination to set him up was entertaining it was obvious that her main goal was for him to be happy. I was delighted for Kristin with the growth that happened in her relationship with her parents.

I really enjoyed that the story focused a lot on the detective work required to solve a crime. Details were researched and discovered at a pace that felt realistic. This story did not disappoint and I can’t wait to read Rick’s story.

(I received an ARC of this book from Revell through NetGalley; opinions expressed
in this review are my honest opinion and completely my own.)

Other Books in Series: 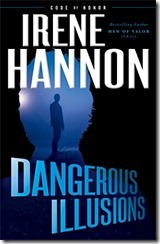